Trackman is state of the art golf technology Posted by Andrew 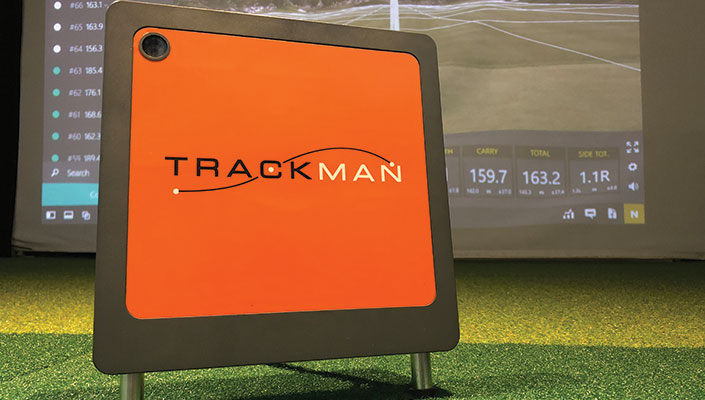 By now most golfers know a teacher or fitter in their area whom has a TrackMan that they use for teaching or fitting. I would highly suggest you contact them to see if they will “rent” you an hour or two per week so you can practice with the unit. In this article I want to show you “how to practice with TrackMan” so you can work on things just like you would on the range in the middle of your golf season.


TrackMan has over 26 data parameters, but I want you to focus on a few simple ones during your practice sessions.

Low Point: The clubs’ lowest point in the swing arc

Club Path: The direction of your swing (AoA+Swing Direction)

Face Angle: The direction of the face at impact

Club Speed: The speed of the club at impact

Smash Factor: The correlation of club speed to the resulting ball speed

Dynamic Loft: The loft you deliver at impact

Carry: How far the ball carries in the air

Height: The apex of your ball’s flight

Your low point is mainly influenced by the pivot of your body, so if your pivot is faulty your low point will move around causing you to hit the ball fat and thin. This is never more apparent than when you are hitting short pitch shots.

So my favorite way to work on the short game indoors is to hit 20-50 yard shots auditing my low point. At this stage I’m not looking for any specific number I just want to make sure I have a very consistent range just after the golf ball. I never want to see my low point moving around to any great degree, if so, it’s going to be a long day. 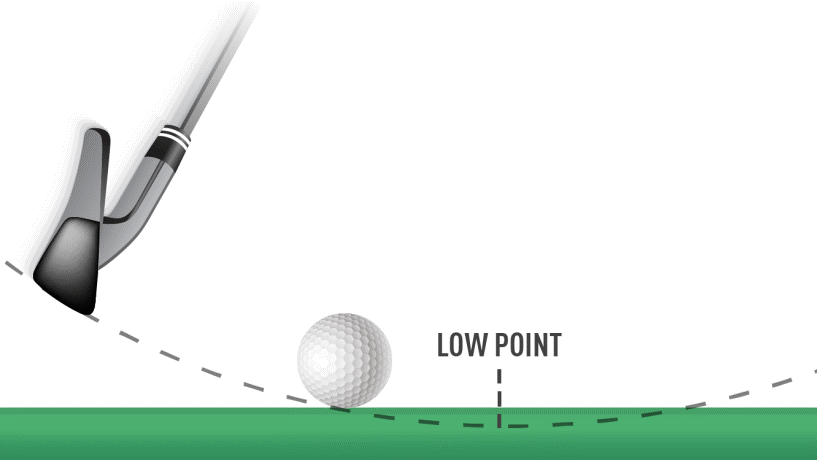 I first want you to make sure your path is going in the direction you wish, because “feel is not real” and if your path is moving in the wrong direction, that’s the first thing we need to fix.

Now let’s assume we ARE swinging in the direction desired, what is the range? It is impossible to swing “x” degrees in to out or vice versa every time so let’s find a three degree numerical range we can consistently put the club into. Based on your desired curvature amount this range can be 1-3, 4-7, 7-10 etc…but three degrees would be my suggestion for the masses. 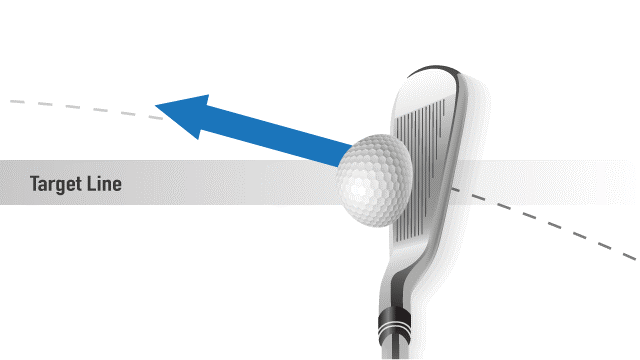 One of the most misunderstood factors in golf is how the face angle at impact (mostly) controls the ball’s initial starting direction. Thus the ability to “put” the clubface in the right position at impact is crucial for you to begin the ball where you would like it to start. Now we know that it is impossible, it takes 1/2000 of a second to actually control the face at impact but we can work on our “feels” that make the face do what we want it to do.

What I like to do is put a range bucket directly between the ball and my target and hit a few shots right and left of the bucket noting the face angle on TrackMan. Then I do the same thing while moving the bucket a touch right of my target and vice versa…from here I am “educating” my hands to produce these actions without thinking about it physically. And this is the key to being able to start the ball where you want each time under pressure.

Ok the first use is obvious, learn how to swing the club faster without compromising your impact quality. But what is the second way to use clubhead speed?

“Find” your best speed that gives you distance, control, and impact quality…sometimes this is faster than what you’re used to while other times it can be just the opposite. Everyone has their own speed, think Nick Price vs Payne Stewart…different swing speeds but both great players and ball strikers in the end. 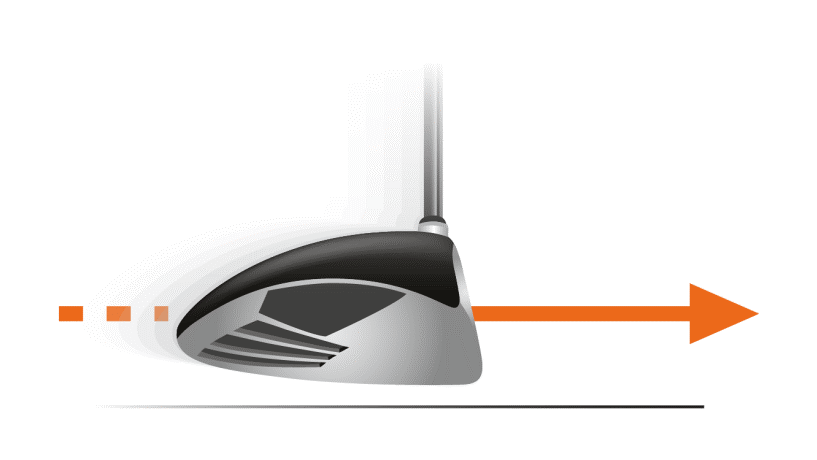 The quality of your impact comes from your smash factor as it pertains to input vs output. In a perfect world you would like to get “everything” out of your clubhead speed- which is the input for the output- ball speed.

The better the quality of impact the more ball speed you will gain with all things being equal. Once again it is not about a specific number, but gaining a consistent range of smash factors based on your level…yes, you can get a higher smash factor and hit awful shots so take smash with a grain of salt.

You are striving to hit good, solid, and quality shots with a higher degree of smash than you are used to having…that’s the key for this data parameter. 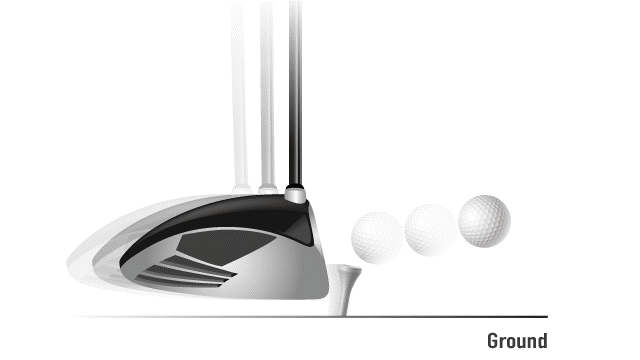 Your delivered loft is one of the biggest keys to controlling your launch angle…too little and you won’t carry the ball as far and it will hit the green too flat. Too much it won’t carry far enough and won’t chase out upon landing.

As you watch your shots fly you can see where they land and how much they chase out per the club used. We want the ball to carry as far as possible and land softly with irons but with the driver we’d like to carry the ball a fair distance and have it run out when landing.

So use your dynamic loft number to control this fact and you’ll see some better shots. 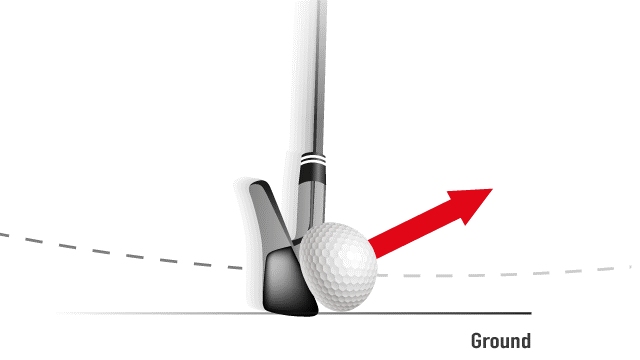 Simply stated carry it as far as possible with the irons so it will land softly. But remember your driver carry is based on conditions! If you play soft and wet conditions, I would suggest you carry the ball as far as possible, but if they are medium you can lower the carry so the ball lands a touch flatter so it runs out.

Experiment with your carry on TrackMan and you will see what I mean as it pertains to total distance. 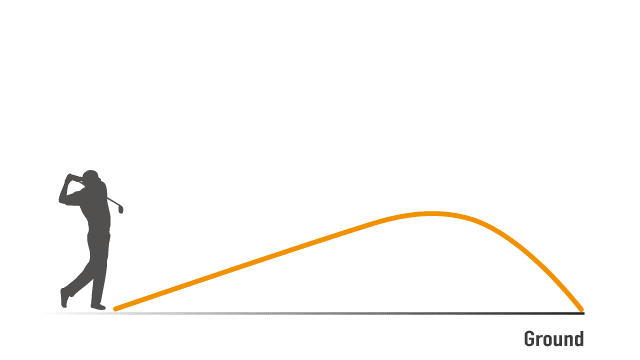 The average driver height for the LPGA Tour is 75 feet in the air and the PGA Tour is 96 feet. People have NO idea just how high this is! Most players hit the ball too flat and this compromises distance in the end.

Take your time to play around with your height on TrackMan and you will see that you need to hit it higher than you really believe, in order to get more distance and softer landings.

Secondly, hit super low and super high golf shots to see how the ball reacts on the distance end, when you are playing in windy conditions or on hard greens so you can access those tight pins. If you cannot alter your trajectory you will be stuck.

I hope by now you have seen that TrackMan is more than just a teaching and fitting tool it is a full-service practice tool if you want it to be – It’s up to you! 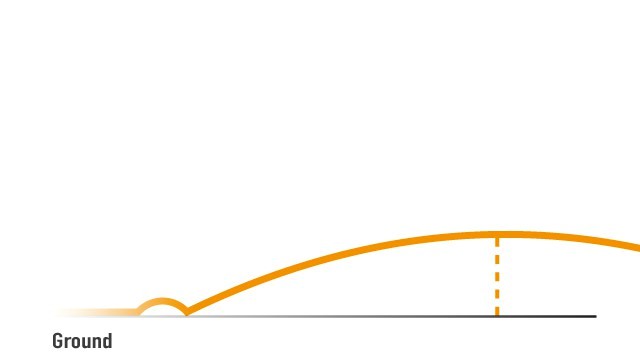 Come in to St Andrews indoor golf centre and tell us your favourite TrackMan practice session.